The productivity is completely different. 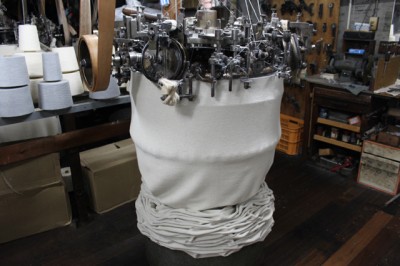 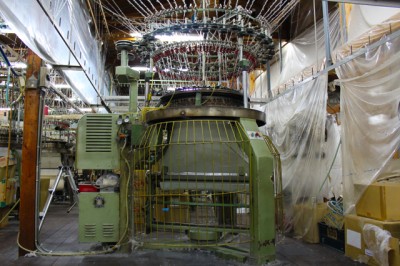 What differs between the Tsuriami-ki and current high-speed knitting machines? Let’s compare two machines, traditional and modern, which both knit normal fleecy fabric. The picture on the left is an example of one of our largest Tsuriami-ki sizes, which is able to knit wide cloth. We’re comparing it with the machine on the right, a modern style plain circular knitting machine, is able to knit almost the same width of fabric. Firstly, if we look at the number of yarns needed in each machine, there is an obvious difference: the number of ‘feeders’ – the part of the machine that ensures the yarn attaches to the needle properly. Although the Tsuriami-ki has only one or two feeders, the modern machine has no less than 24 sets.
To put that another way, if both machines revolve once, the Tsuriami-ki will knit only one or two weaves, but the modern machine is able to knit 24 weaves. If both rotate at the same speed, the Tsuriami-ki will only knit one meter (about 40 inches) in one hour, whilst the other will knit 24 meters (945 inches). Furthermore, this difference will increase as modern machines are able to rotate at higher speeds. Moreover, many more feeders can be attached to modern machines depending on the kind of fabric, so it’s no wonder almost all factories have switched to more up to date machinery. When compared to these new machines, although it depends on the machine size and the kind of fabric, the production capacity of the Tsuriami-ki is only about 5% of the capacity of the modern machine, at most.

The special ‘bearded needle’ draws in air for gentler knitting. 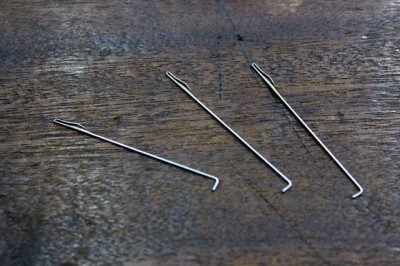 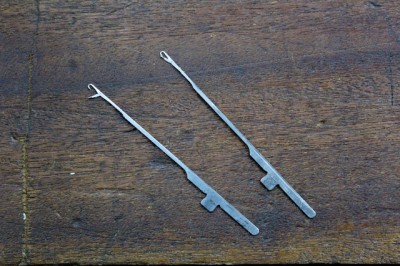 Next, let’s look at the difference in needles. On the left is a ‘bearded needle’ used by the Tsuriami-ki, and on the right is a ‘latch needle’, used by the high-speed machine. In order to knit Tsuri fabric, the bearded needle is essential. Today, there is only one company in the world, GROZ-BECKERT, which continues to produce these needles. Although it depends on the machine size, 1000 or more bearded needles are attached to one Tsuriami-ki. The bearded needle keeps the fabric fixed to the machine, which is an important part of keeping our fabric soft. In contrast, the latch needle moves up and down whilst knitting, so the yarn is constantly pulled as the fabric is knitted.

The machine doesn’t pull or stretch the fabric, either. 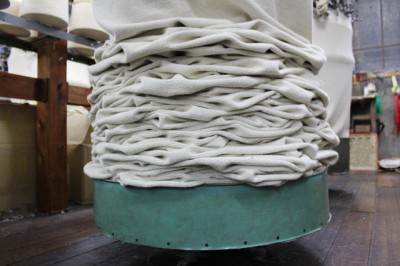 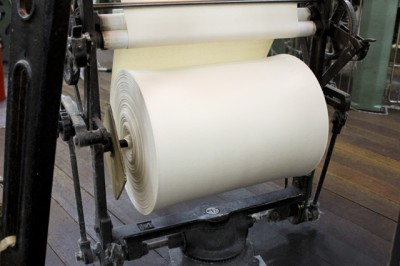 These photos show the knitted fabric. As you can see, fabric made by the Tsuriami-ki naturally rests under the machine, whilst the fabric made by the modern machine is forced into a tight roll. In order to roll the fabric in this way, there is a constant strain on the needles and the yarn, and this carries over to the finished product because it is rolled so tightly; it is unable to ‘relax’ as the Tsuri fabric does. Since the Tsuriami-ki never exerts any tension on the fabric it knits, the high quality is maintained throughout. This is one of the most important differences.