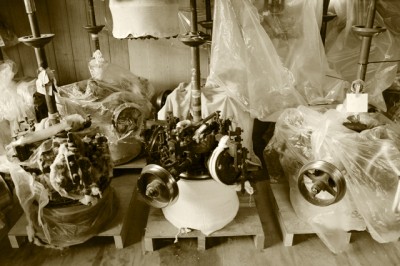 The Tsuriami-ki is a traditional knitting machine. We refer to it by the Japanese name, but in English it is sometimes called the ‘Loopwheel machine’, the ‘French Circular Frame’ or the ‘Switzer’. It was first imported into Japan during the beginning of the twentieth century, and from that time onwards until the 1960s the number of machines in operation steadily increased. However, with the progression of the consumerist society, mass production and mass consumption became the norm, which lead to factories switching to more modern, high-speed knitting machines instead. As these new machines produced more fabric in a shorter amount of time, use of the old style Tsuriami-ki quickly decreased. Furthermore, the original manufacturer of the machine ended production, disposing of many of the remaining Tsuriami-ki machines. Therefore, the Tsuriami-ki, which requires skilled workers with years of experience to operate properly, all but disappeared from factory floors throughout the world.

The fabric has a superior texture. 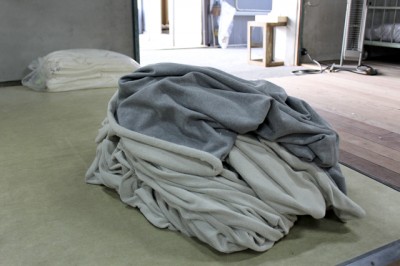 Although the productivity of the Tsuriami-ki is lower than modern machines, the quality of fabric produced is much higher. This is because when the fabric is being knitted the yarn is prevented from being stretched, and after completion the knitted fabric is neither rolled nor folded. This means the fabric is soft and responsive, just like hand-knitted fabric. This method of knitting is what gives our fabric its superior texture and what ensures that it keeps its shape and quality for such a long time. Many vintage sweatshirts made before the mid 60s use Tsuri fabric, and this is what allows them to continue to be loved by their owners even now, after so many years have passed. 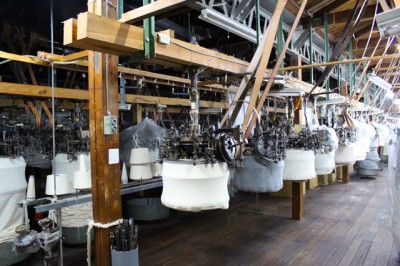 Because the machine is hung from ceiling beams, it came to be known as the Tsuriami-ki. In Japanese, ‘tsuri’ means ‘hanging’, ‘ami’ means ‘knitting’, and ‘ki’ is the word for ‘machine’. Various single jersey styles, such as plain stitch fabric (mainly used for t-shirts) or fleecy fabric (mainly used for sweatshirts), can be knitted with this machine. The circular shape of the Tsuriami-ki means that fabrics are knitted seamlessly in a cylindrical shape. In recent years, the fabric has come to be used for various different products other than clothing, such as furniture, hats and the like.

The texture comes from the structure of the machine 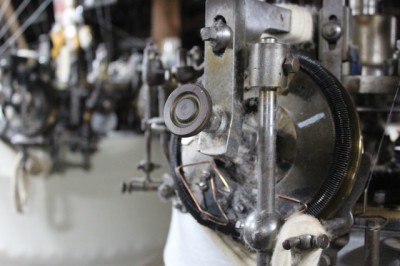 How is it that the Tsuriami-ki knits this superior fabric? The answer is in the knitting process. The fabric is knit when yarn passes along the part called the ‘sinker wheel’. At that time, the yarn is not stretched or pulled. In other words, what makes our machines so special is that they always keep the yarn relaxed, allowing air to be folded into the fabric during the knitting. This method creates the unique texture of our Tsuri fabric. Now, let’s examine the secret of the Tsuriami-ki in more detail on theComparison page.